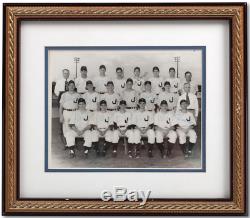 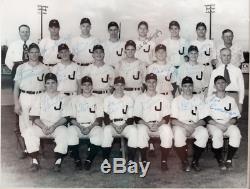 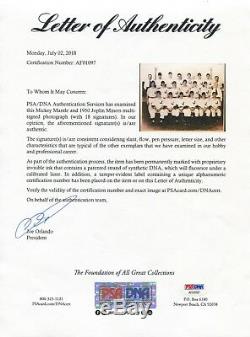 Extremely rare 1950 Joplin Miners Framed Photograph featuring Mickey Mantle and autographed by Mantle when he was just 18 years old! In fact, its signed by the entire team and its the only one known to exist! Joplin was the pivotal turning point in Mickey Mantle's meteoric rise to superstardom. The 18-year-old prospect had left the 1949 Class D Independence Yankees as a scrawny 160-pound boy, and he joined the 1950 Class C Joplin Miners as a filled-out, 180-pound manall rippling muscles and lightning reflexes.

No wonder his smile is as big as Oklahoma! As author Allen Barra has described the change, Now, instead of merely hitting the ball ten or twelve feet over the fence, Mantle was smashing the drives into the light towers beyond the fences. The young Mick was too talented to hang around Joplin long.

Soon Casey Stengel came calling and brought the phenom up to the majors with DiMaggio, Berra and company for the last few weeks of the Yankees' 1950 championship campaign. The Mick had blossomed in Joplin. Now he was ready to go make his mark in the House That Ruth Built. Presented here is perhaps the ultimate display piece from that crucial steppingstone season: A 1950 Joplin Miners original team photograph (valuable in its own right) that is fully signed by the 18 featured players. Orchestrated and previously owned by Joplin manager Harry Craft himself, the 8" x 10" autographed photo carries Mantle's seminal signing style and ranks among the Mick's very earliest team-signed photos.

The seller is "zenbaseball" and is located in New York, New York. This item can be shipped to United States.