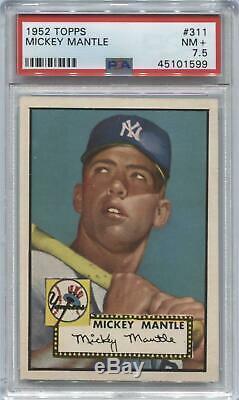 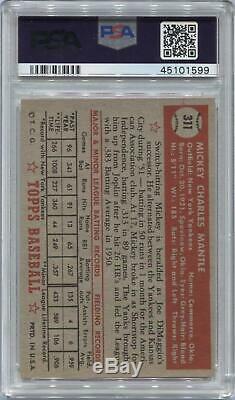 1952 Topps Baseball #311 Mickey Mantle PSA 7.5 (NM+). The 1952 Topps Mickey Mantle #311 is the most important baseball card in the entire industry. There is no doubt that it is the anchor of the most iconic postwar baseball card set ever made, but the power of its image is greater than the sum of the card's parts or attributes. If there were a Mount Rushmore of cards this card would be on it every single time. This gorgeous card has been professionally graded a 7.5 (NM+) by PSA.

While we know that these claims are often made in the vintage card industry... This card is quite frankly much nicer than many of the PSA 8's that we have seen. For those of you that value honesty and integrity when considering an investment such as this, this card literally went from a shoebox into a PSA holder!! Read the full story about the card here. Mantle was one of the best players and sluggers and is regarded by many as the greatest switch hitter in baseball history. Mantle was inducted into the Baseball Hall of Fame in 1974, and was elected to the Major League Baseball All-Century Team in 1999. Mantle was one of the greatest offensive threats of any center fielder in baseball history. He has the highest career OPS+ of any center fielder, and he had the highest stolen base percentage in history at the time of his retirement. In addition, compared to the other four center fielders on the All-Century team, he had the lowest career rate of grounding into double plays, and he had the highest World Series on-base percentage and World Series slugging percentage. He also had an excellent 0.984 fielding percentage when playing center field. Mantle was noted for his ability to hit for both average and power, especially tape measure home runs, a term that was originated by a play-by-play caller reacting to one of Mantle's 1953 home runs. He hit 536 MLB career home runs, batted. 300 or more ten times, and is the career leader in walk-off home runs, with thirteen-twelve in the regular season and one in the postseason. Mantle is 16th all-time in Home runs per at bats. He is 18th in on-base percentage. He was safe three out of four times he attempted to steal a base. He won the MVP Award three times, came in second three times, and came within nine votes of winning five times. Mantle won the Triple Crown in 1956, when he led the major leagues in batting average. 353, home runs (52), and runs batted in (RBI) (130). He was an All-Star for 16 seasons, playing in 16 of the 20 All-Star Games that were played during his career. He was an American League (AL) Most Valuable Player (MVP) three times and a Gold Glove winner once. Mantle appeared in 12 World Series including seven championships, and he holds World Series records for the most home runs (18), RBIs (40), extra-base hits (26), runs (42), walks (43), and total bases (123). 7 retired Monument Park honoree Major League Baseball All-Century Team Hall of Fame (1974). DUE TO THE HIGH DOLLAR VALUE OF THIS CARD WE WILL ONLY BE ACCEPTING A BANK WIRE. VETTED PERSPECTIVE BUYERS WILL BE ALLOWED TO COME TO OUR OFFICES TO VISUALLY INSPECT THE CARD IN PERSON. Most cases are double-boxed to avoid damage in transit. We are sorry for any inconvenience.

Also do not request us to declare items at a lower value, it is not an option, as it is illegal in the United States. International credit cards are NOT accepted. About Dave & Adam's. When you shop with Dave and Adam's Card World, rest assured knowing that you are dealing with an established business, the best in the industry.

The world's largest source of trading cards and collectibles. Accredited by the Better Business Bureau. BizRate Platinum Circle Of Excellence Honoree for outstanding Customer Service. 50,000 square-foot custom facility with over 60 people on staff.

We supply thousands of customers, including many stores, dealers, and collectors... Let us help you as well! We are recognized throughout the industry for.. Dave and Adam's Card World, LLC. The item "1952 Topps Baseball #311 Mickey Mantle PSA 7.5 (NM+) 1599" is in sale since Tuesday, March 3, 2020.

This item is in the category "Sports Mem, Cards & Fan Shop\Sports Trading Cards\Baseball Cards". The seller is "dacardworld" and is located in Tonawanda, New York. This item can be shipped worldwide.